Top Gun in ScreenX Surpasses $50 Million at the Box Office 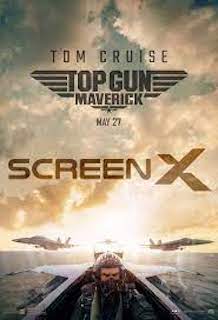 The combined business from CJ 4DPLEX's two premium experiences have contributed four percent of the overall box office for the summer blockbuster across its combined 681 screens worldwide. The company has been rapidly growing their global footprint, especially with ScreenX where the focus has been to open more flagship premium large format locations in key territories around the world.

Top Gun: Maverick in ScreenX provided 58 minutes of exclusive ScreenX imagery – the most ScreenX content ever to be produced for a ScreenX feature film. ScreenXʼs peripheral three-screen design allows audiences to take in majestic views, feel the rush of flying and puts them right in the middle of the climatic jet fighting scenes with Maverick and his crew. CJ 4DPlex worked closely with Top Gun: Maverick director Joe Kosinski and Paramount Pictures to ensure the highest quality presentation of the film and selected key scenes and exclusive imagery for the ScreenX version.

The 4DX immersive theatre technology enhances the on-screen visuals of action-packed blockbusters, transcending the traditional cinema experience through special effects including motion-synchronized seats, wind, fog, rain, lightning, snow, bubble, vibration, and scents. The result is one of the most immersive cinema formats in the industry, drawing the Gen Y and Gen Z demographics into the cinemas and off their devices.

"Thanks to Top Gun: Maverick we have seen unprecedented box office numbers for 4DX and ScreenX that are consistently breaking records worldwide," said Jongryul Kim, CEO, CJ 4DPlex. "We look forward to continuing the momentum as more and more filmmakers see the value in our premium theatre formats and how they enhance the overall viewing experience."

"We want to thank Tom Cruise, Joe Kosinski, Jerry Bruckheimer and everyone at Paramount Pictures for creating a film that has reinvigorated the movie theatre experience and reminded audiences what it's like to see an epic movie." said Don Savant, CEO & president, CJ 4DPlex America. "Together we have proven that our two formats offer a truly unique experience that can only be appreciated in a movie theatre."

Kosinski said, "Tom, Jerry, and I are obsessed with telling stories that need to be experienced on the big screen. We designed Top Gun: Maverick to be seen in theatres and the ScreenX and 4DX versions create an experience that are completely unique. Working with the team at CJ 4DPlex, I was thrilled that we were able to use the side camera footage from our six-camera cockpit array to fill out both wings of the ScreenX format with real photography. The result is a totally immersive version of our film that can't be replicated anywhere else."

"Paramount Pictures was thrilled to feature Top Gun: Maverick' in ScreenX and 4DX, both of which provided a unique premium experience for movie fans to experience the film in different ways and we look forward to continuing to utilize the technology CJ 4DPlex can provide on future films," said Marc Weinstock, president of worldwide marketing & distribution, Paramount Pictures.