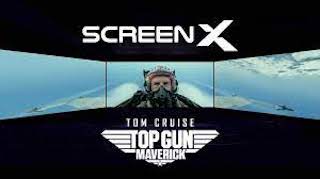 This continues to mark the highest grossing title in the company’s history, with Top Gun in 4DX surpassing $40 million and Top Gun in ScreenX surpassing $20M at the global box office. With 786 4DX theatres and 370 ScreenX theatres worldwide, CJ 4DPlex’s formats combined are now the second largest premium format network in the world.

Don Savant, CEO and president, CJ 4DPlex America continued, “Over two years ago, the theatre industry was considered all but gone. We could have never expected to be breaking ScreenX and 4DX records so quickly after the global pandemic. Top Gun: Maverick is a testament to the power of filmmaking, and we are thrilled audiences can experience the film in our truly unique and immersive formats.”

Top Gun: Maverick in ScreenX provided 58 minutes of exclusive panoramic imagery – a first for ScreenX. ScreenXʼs peripheral three-screen design allows audiences to take in majestic views, feel the rush of flying and puts them right in the middle of the climatic jet fighting scenes with Maverick and his crew. 4DX theatres are one of the most immersive cinema formats in the industry. The elevated theatre technology enhances the on-screen visuals of action-packed blockbusters, transcending the traditional cinema experience through special effects including motion-synchronized seats, wind, fog, rain, lightning, snow, bubble, vibration, and scents.