CJ 4DPlex has announced that Paramount Pictures' Top Gun: Maverick broke ScreenX and 4DX records, grossing more than $28 million combined across 631 screens worldwide to-date. On Wednesday the film will open in Korea, which accounts for 49 ScreenX locations and 39 4DX locations. 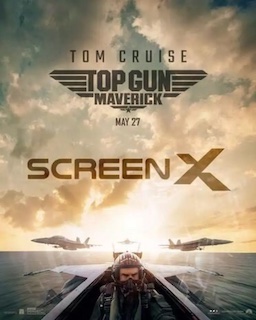 The film, now in sixth week, has shattered several ScreenX format records and is already the highest grossing ScreenX title of 2022 globally bringing in more than $7 million. Week after week, the title in ScreenX has seen unprecedented growth at the box office. In the U.S. in its third week of the run, ScreenX experienced an unprecedented 68 percent increase in box office admissions from its previous weekend. To date in the U.S., on just 61 screens the film has grossed more than $4.5 million bringing in a $73,000 per screen average.

In the UK across 22 ScreenX locations, the film has brought in more than $987,000 with a $45,000 per screen average, making it the second highest grossing ScreenX title during the pandemic in the UK. The film saw a massive 103 percent increase in box office ticket sales from its week two to week three.

Top Gun: Maverick in ScreenX features 58 minutes of exclusive ScreenX imagery – the most ScreenX content ever to be produced for a ScreenX feature film. The format's peripheral three-screen design allows audiences to take in majestic views, feel the rush of flying and puts them right in the middle of the climatic jet fighting scenes with Maverick and his crew.

"We're so thankful to Tom Cruise, Joe Kosinski, Jerry Bruckheimer, David Ellison and the entire team at Paramount for creating a cultural moment that is bringing audiences back to theatres," said Don Savant, CEO & president, CJ 4DPlex America. "Top Gun: Maverick showcases CJ 4DPlex's premium formats, ScreenX and 4DX, which expands moviegoing by bringing the audiences a truly differentiated experience from other cinema offerings as well as from the home and streaming platforms."

CJ 4DPlex's multi-sensory 4DX experience has also garnered several record-breaking numbers with Top Gun: Maverick. The movie is the top performing film in the 4DX format this year with more than $20.6 million in ticket sales across 438 auditoriums, without Korea's screens, which are set to open this week.

Top Gun: Maverick in 4DX puts you directly into the cockpit, as you feel every twist and turn in a multi-sensory cinema-going experience. 4DX utilizes motion, vibration, water, wind, snow, lightning, scents, and other special effects that enhance the visuals on-screen. Each auditorium incorporates motion-based seating synchronized with more than 21 different effects.

CJ 4DPlex worked closely with director Joe Kosinski and Paramount Pictures on selecting the most immersive scenes for ScreenX and carefully crafted the motion and effects for 4DX to ensure the highest quality presentation of the film.

"The increase in audiences and our record-breaking box office results reinforces the strong word-of mouth around the film for both of our formats, many of whom are returning to see the movie in a completely unique presentation," said Jongryul Kim, CEO, CJ 4DPlex. "We hope that movie fans who have discovered ScreenX and 4DX for the first time will experience other great films that can't be seen anywhere else."

"Premium formats like ScreenX and 4DX are helping drive audiences to see this spectacular film in different ways and it shows in the numbers, even a month after a massive opening weekend," said Marc Weinstock, president, worldwide marketing and distribution, Paramount Pictures. "We are thrilled with seeing movie fans continue to come out and see this epic blockbuster on the big screen in these new and exciting formats."