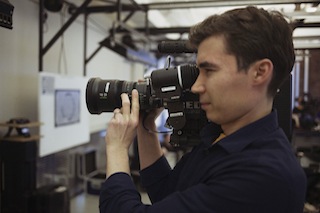 According to TCS president Erik Schietinger, who co-owns the company with his brother, TCS vice president and chief operating officer, Oliver Schietinger, “We believe in owning the full range of common focal lengths covered in a lens set, and we were very interested in the 85-300mm lenses because they cover the telephoto range very well while keeping the form factor small and portable. A wide-angle option is key to this line though, because it allows productions to ensure the consistency of their look within the Cabrio line without having to move to wide-angle primes or zooms from different manufacturers when they need a wide-angle.”

TCS has found a growing marketing for shooters looking for a digital cinema look but with the portability of ENG-style equipment. “Our clients who are producing reality television and live events are very excited about the arrival of a PL-mounted zoom that can easily be converted from ENG-style functionality to a cinema set-up with motor controllers as needed in a matter of minutes,” said Schietinger.

The wide angle on the 14-35mm Cabrio is ideal for a variety of shooting scenarios common to TCS clientele, including establishing shots, filming in tight spaces for reality and low budget location shoots, and handheld and Steadicam work when deep focus and image stabilization are important.

“While 19mm is considered fairly wide in the Super 35mm format,” said Schietinger, “there is a frequent desire to go slightly wider due to spacial limitations on location, and the focal range of the zoom makes it easy to ‘dial in’ the appropriate focal length needed for any given shot without being married to an exact focal length until the next lens change.  And with certain cameras now using crop sensor sizes, such as the recent influx of S16-sized digital cameras, a wide-angle like the 14-35mm can easily serve as a more standard zoom on a 1.6-2x cropped sensor.”

TCS clients MTV, National Geographic, and Al Jazeera have used Cabrio lenses on recent shoots, and they’ve been rented for use on the Youtube Music Awards and the documentary Jay-Z: Made in America.