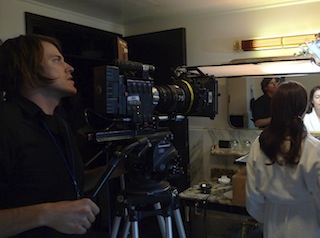 When Sweatpants Media was contracted by the Viceroy Hotel Group to feature their newest location, the Viceroy New York in Manhattan they knew that the piece would need to communicate a high-end, high fashion feel. “The client’s expectations were, as always, high. Every shot needed to look like it was pulled from a fashion magazine,” explains Jonny Zeller, Sweatpants co-founder.

The vision was to create a fashion film that took place within the hotel space. While traditional hotel commercials focus on amenities and location, this one focuses on a lifestyle. Speaking of the inspiration for the piece, Zeller says, “The Viceroy in Manhattan channels the classic style of old New York. A mixture of old and new, it creates a timeless feel. Like a duet between Frank Sinatra and Jay-Z, this short film represents the success of the past and all the promise of today.”

Production used a Steadicam-mounted Red Epic for most of its shots. The entire piece was filmed in 5K. Though the majority was shot at 23.98, higher frame rates were used to accentuate the beauty of the actors’ movements through the hotel. Due to the high level of camera movement, Zeller and his DP, Alex Jacobs, opted for the Schneider Cine-Xenar III prime lenses instead of a larger, heavier zoom. Each of the lenses in the family, 18mm/T2.2, 25mm/T2.2, 35mm/T2, 50mm/T2, 75mm/T2.0 and 95mm/T2 was used during the production.

Zeller appreciated that the lenses each have the same dimensions, do not change volume during focus, and focus and iris gears share identical positions. “The Cine-Xenars made things more efficient since the Steadicam op didn’t have to re-balance after every lens change,” Zeller recalls.

“The Cine-Xenar III primes captured the look we were going for without being distracting, which was something I was really happy with,” Zeller says.

Alex Jacobs agreed, saying, “They have a nice, soft flare which to me feels a little more classic than other lens flares with today’s lenses, which are a bit more harsh and obvious.”

To see the results, view the video at: https://www.youtube.com/watch?v=lFW7iLoR2T0