Working with Fathom Events, RiffTrax’s Michael J. Nelson, Kevin Murphy, and Bill Corbett (of Mystery Science Theatre 3000 fame) will be back in cinemas this month with their special brand of comedy with RiffTrax Live:  The Return of Swamp Thing. 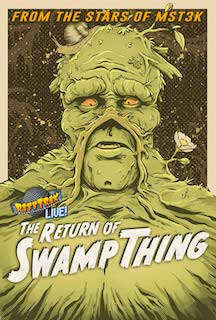 Swamp Thing, AKA Swampington Montgomery Thing, returns to thwart the sinister plans of the evil Doctor Arcane, who apparently is also back. But, here for the first time is Heather Locklear, the young woman who is drawn to the mysterious charms of Mr. Thing and desires a love that is both human and plant based.

A sequel to the Wes Craven cult classic, The Return of Swamp Thing is decidedly not directed by Wes Craven, but that’s fine, because it means this one is bigger, more fun, and way more riffable.

Since first partnering in 2009 with RiffTrax Live: Plan 9 from Outer Space” the RiffTrax and Fathom Events partnership has resulted in the screening of 33 unique titles, over 60 play dates, in an average of 700 movie theaters for the live events, with more than 1.2 million tickets sold for a total gross box revenue of $14.6 million.