Studio Movie Grill is partnering with Warner Bros. Pictures and Participant to offer pre- and post-opening private screening experiences of the new film Just Mercy, scheduled to release nationwide on January 10. During these special screenings, SMG will donate five percent of the proceeds from food and beverage sales to the Equal Justice Initiative, founded by Bryan Stevenson. 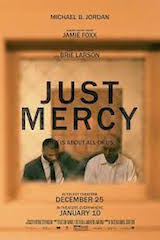 A powerful and thought-provoking drama, Just Mercy, starring Michael B. Jordan, Jamie Foxx and Brie Larson, is based on the true story of Harvard-educated attorney Bryan Stevenson, who goes to Alabama to defend people who had been convicted without proper representation. One of his first cases is Walter McMillian, an innocent man condemned to death.

In 1989, Stevenson founded the Equal Justice Initiative as a commitment to ending mass incarceration and excessive punishment in the United States, to challenge racial and economic injustice, and to protect basic human rights for the most vulnerable people in American society.

"Just Mercy tells a moving story about civil rights defense attorney Bryan Stevenson, how he fought for those in need and later created the Equal Justice Initiative so that he could continue to help the poor, the incarcerated, and the condemned," said Brian Schultz, SMG founder & CEO. "SMG is proud to be partnering with Warner Bros. and Participant to bring special screenings of this film to SMG locations across the county. We feel it is important to highlight films that center on people who have helped the community become a better place, and SMG will donate five percent of the proceeds from food and beverage sales during these private screenings to the Equal Justice Initiative."

"Just Mercy is an amazing, inspirational film. We are excited to work with the dedicated group at Studio Movie Grill, whose generosity in helping to bring Just Mercy to audiences nationwide will inspire audiences and also help them learn more about the work of Bryan Stevenson, a true American hero," said Participant CEO David Linde.