Stray Angel Films, a Los Angeles-based digital motion picture rental, production and production services company, has purchased six Cartoni Focus 12 fluid heads and tripods from Manios Digital & Film. The company has added the fluid heads to its rental inventory and is including them in packages for mid-sized cameras. 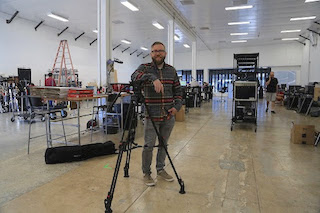 Stray Angel serves a diverse clientele ranging from large film and television studio operations to independent producers creating content for the web. It was seeking a new support system to package with popular mid-sized cameras such as the Canon C300 and Sony FS7. “We wanted a versatile support system that was rugged but lightweight,” said COO Josh Burrows. “The Focus 12 was the perfect fit. It’s solidly built and has great features including a sliding top plate and the popular Euro quick release plate. It’s also very light, which makes it attractive to crew working busy production schedules.”

Burrows noted that the Cartoni name is synonymous with quality. “Our clients are familiar with the Cartoni brand and have a lot of confidence in their products,” he said. He added that the heads and tripods are already being used in production. “They fit very well with the productions we service.”