Continuing to expand its resources for motion picture and television sound, Sony Pictures Post Production Services has installed an Avid S6 control surface in its 158-seat Anthony Quinn Theatre. The largest Avid S6 console installed anywhere to date, the 22-foot long board features 48 faders in each of two sections, along with 12 meter displays, two sets of dual joysticks and two bias panels. It is supported by four Pro Tools HDX2 players and two HDX recorders. The console is connected via high-speed Ethernet to editorial rooms and other facilities on the Sony lot. 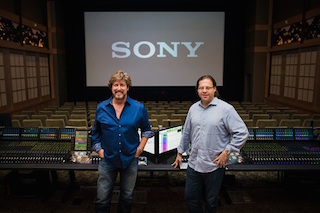 Introduced by Avid last year, the S6 combines the best features of the company’s ICON and System 5 systems in a new modular design. “The S6 is a very powerful and intuitive system,” said Sony Pictures Post Production Services Executive Vice President Tom McCarthy. “It allows mixers to work more efficiently and fluidly. Most importantly, it enhances their ability to work creatively with sound and build groundbreaking soundtracks. Our artists are very excited to have access to this new tool.”

The new console was used for the first time by Re-Recording Mixer Steve Pederson and Supervising Sound Editor Steven Ticknor to mix sound for the Screen Gems thriller When the Bough Breaks. “What I enjoyed most were the layout functions of the S6, which are like a hybrid of memory locations and window configurations that you find in Pro Tools but much more powerful,” recalls Ticknor of the experience. “Avid has listened to mixers and produced an integrated mixing and editing tool.”

Pederson noted that what he likes best is the immediate visual feedback provided by the console’s metering displays. “My approach to mixing on this new surface will undoubtedly shift to leaning on the console more in a traditional sense, and less so in the editing room mixing style of the past with a keyboard and a mouse,” Pederson said. “Avid has created a board that conforms to the emerging workflow of automated mixing in the Pro Tools session—yet it has done so in a powerful, ‘retro’ style console. It’s going to be great.”