Sony Pictures’ Bloodshot to Open in the ICE Theatres Format 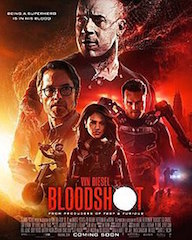 ICE Immersive technology features non-reflecting LED panels flanking each side of the auditorium to fill the moviegoer’s peripheral vision and complement the feature film being showcased on the front screen. Their in-house post-production team in La Rochelle creates the custom, ambient images shown on the panels, and syncs them to each film.

This Los Angeles location, in partnership with AEG, was the first ICE Theatres to open outside of France, as part of an overall, global expansion strategy. Late last month, ICE Theatres opened its second international location in Riyadh, Saudi Arabia with Vox Cinemas. More locations in the Middle East (via the partnership with Vox Cinemas) as well as in North America will soon be announced.

Based on the bestselling comic book, Bloodshot, Vin Diesel stars as Ray Garrison, a soldier recently killed in action and brought back to life as the superhero Bloodshot by the RST corporation. With an army of nanotechnology in his veins, he’s an unstoppable force –stronger than ever and able to heal instantly. But in controlling his body, the company has sway over his mind and memories, too. Now, Ray doesn’t know what’s real and what’s not – but he’s on a mission to find out.

Bloodshot makes its U.S. debut on March 13, Saudi Arabia on March 12 and in France on March 25.