Sony Digital Cinema 4K and Hawk-Eye Innovations today announced what the companies say is the first full proof of concept of Hawk-Eye’s globally renowned technology outside the world of sports broadcasting. Hawk-Eye’s Smart Production technology is being used to capture the Hackney Empire’s production of Charlie Parker’s Yardbird chamber opera, with a view to demonstrating scalable, cost-effective remote production for arts establishments.

The jazz-infused theatre show is being recorded for cinemas using a production package that includes five remote-operated Sony PXW-FS7 cameras and IT-based production technologies. By harnessing an intelligent production system and remote-controlled cameras, Sony and Hawk-Eye are able to produce original content for Hackney Empire at a far lower cost than was previously possible with typical outside broadcast production facilities. 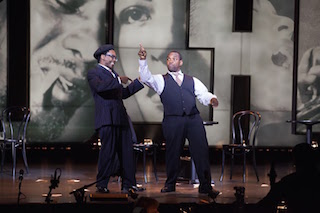 Drawing on its background and expertise with the Digital Cinema Initiative post-production for the recordings will be handled by Sony Digital Cinema 4K, in order to produce a final DCP that meets the rigorous standards set for the big screen.

The long-term aim of the project is to open up new revenue opportunities for smaller arts entertainment providers like the Empire, by providing them with the ability to produce original content for cinema distribution across the UK. Having pioneered modern sports broadcast technology, Hawk-Eye’s adaptable, scalable system will help to bring traditional entertainment providers into the digital age.

The production set-up uses four FS7s on remotely operated robotic heads, as well as one static FS7 and a micro-camera in the orchestra pit. Operating the cameras remotely from a 3m x 3m production area at the back of the auditorium, a four-man production crew is able to capture the show without taking up any revenue-generating seat-space in the auditorium, or disrupting the theatre audience’s experience.

Two Hawk-Eye Smart Production servers help to co-ordinate the cameras, while a third is used for cutting and managing the recordings, which are stored on a separate recording deck. The small production team includes two robotic camera operators, a director, and a guarantee engineer – who follows the script and helps to co-ordinate during the shows. A variety of microphones are placed in specific positions throughout the stage area and orchestra pit, to ensure the team records a rich, lifelike sound to accompany the Full HD footage.

The production at the Empire will serve as a proof of concept for Hawk-Eye’s end-to-end workflow, with a view to developing a live-stream workflow for future projects using the same set-up.

Clarie Middleton, chief executive, Hackney Empire said, “This new solution harks back to the Empire’s heyday in the 1950s, when it was used as a setting for TV shows. Now 115 years old, we’re proud that we’re still exploring the latest technologies to make the arts more accessible. By capturing a stage production like YardBird, Sony Digital Cinema and Hawk-Eye are helping us to provide people who wouldn’t usually come to the theatre with an opportunity to enjoy the excitement of our shows. Thanks to their production and post-production expertise, we can make sure our shows look as good on the silver screen as they do in real life. We’re excited to be laying the foundation for opening up our productions to audiences across the UK.”

Ed Hawke, operations director at Hawk-Eye Innovations said, “This project provided us with the perfect opportunity to showcase new ways in which Hawk-Eye’s technology can be used. Thanks to our streamlined production workflow and remote cameras, we’re able to capture on-stage action without disrupting the audience or taking up paying seats – vital factors for working theatres. Our scalable, streamlined solution has been tested across numerous sports, from ice hockey to handball, and at events from Wimbledon to the Olympics. Now we’re ready and excited to show how it can bring cost-effective production to the arts.”

John Bullen, content development manager at Sony Digital Cinema said, “Other production set-ups require large crews and extensive equipment, and many theatres simply aren’t able to afford this scale of production. Theatres like the Hackney Empire are enthusiastic about making their content more accessible by extending it to cinema goers, and Hawk-Eye’s solution makes that possible. As well as promoting the theatre’s shows more broadly, it opens up new revenue streams that were previously inaccessible to any but the largest theatre organizations.”