SMPTE to Outline Best Practices When Moving to the Cloud

The Society of Motion Picture and Television Engineers today announced that the SMPTE+ virtual event Migrating Media & Entertainment into the Cloud: A Real-World Perspective, now slated for August 31, will feature a session exploring preservation, continuity, and resilience after the move to the cloud. In addition to outlining best practices across these areas, experts will answer the uncomfortable question, "What happens in the unlikely event that the internet fails?" 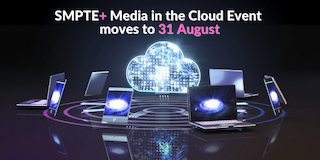 "Never could we have anticipated that the media industry would be undertaking its migration to the cloud in the midst of worldwide disruption, but that has proved to be the case," said Joel Welch, director of education at SMPTE. "So, while the benefits of the cloud are beyond dispute at this point, organizations in our industry face a great deal of uncertainty; they need to know that increased dependence on the internet and the cloud can give them the agility to move forward despite new or potential challenges. During this SMPTE+ event, experts will bring clarity to this question and describe how to ensure resilience through and beyond their move to the cloud."

The complete agenda for SMPTE+ "Migrating Media & Entertainment into the Cloud: A Real-World Perspective" is online at https://plus.smpte.org/2021plus/media-in-the-cloud.

As another SMPTE initiative to help media technology professionals get ahead and find success, SMPTE+ is free to SMPTE members. Upon registration, they gain access not just to the August 31 event, but also to the immensely popular June 3 event, Expanding the Color Universe, and two other SMPTE+ events later this year.

Professionals may choose to attend only the Migrating Media & Entertainment into the Cloud event for $99, but SMPTE membership offers even greater value: access to all four SMPTE+ events — and the many other benefits of SMPTE membership — for just $165.

Registration and additional information about the full SMPTE+ series is online at plus.smpte.org/2021plus.