Slaves and Kings in Theatres August 22-23 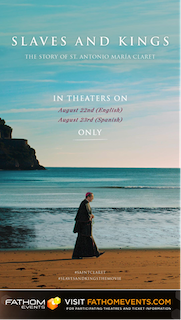 The Bosco Films presentation is the first time that Fathom Events has released a full- length Catholic feature film through its distribution platform.

“We’ve seen notable success with other Catholic-based content – which has so far been in documentary format,” said Ray Nutt, CEO of Fathom Events. “Distributing this full-length feature film about such a prominent figure in history and the life of Catholicism is a watershed moment for us and our ability to connect with Catholic audiences and beyond.”

Slaves and Kings, set in the 1800s, is a Spanish produced film that brings to the screen the compelling story of Saint Anthony Mary Claret, a Spanish Roman Catholic Archbishop, writer and publisher, missionary, and confessor to Queen Isabella II of Spain. Declared a saint in 1950, Claret is the founder of the religious congregation of the Missionary Sons of the Immaculate Heart of Mary, known as the Claretians.

“We are thrilled to bring another inspiring story of faith to American film audiences and to be the first Catholic feature to be released by Fathom is historic,” said Lucía González-Barandiarán, founder of Bosco Films. “Slaves and Kings presents a Catholic hero, a special friend of slaves and kings, who was unwavering despite persecution and whose story is largely unknown. It’s important for us to look to those who exemplify heroic virtue and show us the way of faith amid trials. We are so grateful to Fathom Events for this opportunity to bring powerful stories to American audiences.”

“Saint Anthony Mary Claret is a man for our times,” said Pablo Moreno, director of Slaves and Kings. “Claret gave everything he had to defend the truth - he is an apostle, an intellectual, a missionary and a saint.”

As part of the Fathom Events experience, the filmmakers have included bonus content to enable audiences to go behind the scenes with the missionary Catholic saint who was a congregation founder, reformer, queen’s chaplain, writer, publisher and archbishop.

“Do not leave after the feature,” said González-Barandiarán. “We wanted to take the opportunity to expand on the film and go behind the scenes of this powerhouse Saint with bonus commentary on his influence that reached the Canary Islands, Cuba, Madrid, and Paris, and the Catholic press worldwide.”