Sim, which recently completed a major expansion of its post-production facility in New York City, has seven new rooms there, four that accommodate audio. All four new audio rooms and a central machine room are linked using a network employing components from Focusrite’s RedNet range of Dante-networked audio converters and interfaces. There are now three broadcast audio 5.1-surround mix suites, one with Dolby Atmos capability, and an ADR/VO recording studio, which can accommodate as many as five actors. 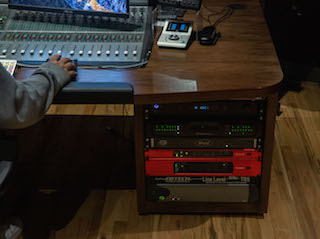 The new studio resources are geared toward scripted television, as Sim Post seeks to support the current boom in broadcast and streaming production. Recent TV credits for Sim New York include the MTV VMAs, Wu-Tang Clan: Of Mics and Men for Showtime, and Deal or No Deal for NBC; recent film credits include Motherless Brooklyn for Warner Bros. (fall 2019) and Someone Great for Netflix. “We are responding to an acute need for more high-quality post services in New York, especially for television,” says Sim Post New York partner and vice president Kim Spikes. “Our new sound and picture resources are designed to meet the finishing and delivery needs of those scripted productions.”

The RedNet audio network is critical to making that happen, says Liam Ford, Sim's senior vice president, post engineering. “RedNet lets us connect all of these spaces together on single strands of Ethernet cable, instead of the dozens of copper cables we’d need otherwise, which is a huge cost savings,” he says. “Also, we have much greater flexibility from putting our Pro Tools systems in a central location and networking from there to each mix room. That way, our editors can continue working on the Pro Tools deck of their choice, configured the way they want it, in any of the rooms, because the Pro Tools systems aren’t locked to a particular room. In addition, when we need extra processing power, we can connect multiple Pro Tools stations together on the network. And we have all of our related audio, such as recording and talkback mics, on that same RedNet network. It’s a full AoIP system.”

The new studios, which came online earlier in 2019, can also serve as a template for future audio-post expansions. “In the event we expand to other cities, what we’ve done in New York with RedNet is the model for how to do it going forward,” he says. “The advantages it offers, at a time when we’re so busy and the amount of work continues to grow, are incredible.”