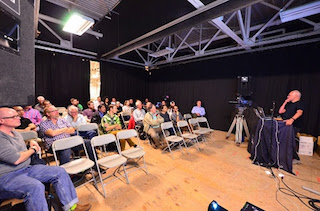 “It was a great opportunity for our customers and colleagues to see what this new camera can do,” said Sim Digital, Toronto, general manager Craig Milne. “We have had a great history with Panasonic products and believe this new camera is going to be a strong option for many of the DPs we work with.”

Michael Fawcett, regional account manager for Panasonic Canada, noted that the VariCam 35 has received a warm embrace from the production community. “Sim Digital has purchased many VariCam 35 units and they are in steady use in the industry in North America,” he said. “The VariCam 35’s unique approach to dual ISO of 800 and 5000 is an industry first. Many of the attendees were skeptical of this claim until Mr. Van De Sande showed content shot at IS0 5000 with very little noise artifacts. That has allowed him greater freedom setting up lighting on set.”