The Short Game Now Available on Netflix and DVD 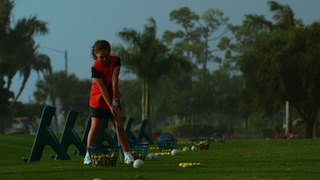 Director Josh Greenbaum’s acclaimed feature documentary The Short Game is now available on Netflix and DVD. The movies profiles eight talented and engaging young competitors at The World Championships of Junior Golf, in Pinehurst, North Carolina, and at their homes in various countries around the world (South Africa, the Philippines, France, China, the United Kingdom and the United States). Filming with the help of 18 Cinema EOS C300 cameras and a variety of lenses from Canon. The Short Game included everything from traditional documentary-style visits to the homes of the eight young golfers for character-based footage, to extensive tournament coverage.

Due to the creative demands of its directors and the diverse situations when filming of the sport of golf, shooting The Short Game required cameras and lenses delivering cinematic picture quality, outstanding low-light imaging and a portable, stealthy form factor that avoided distracting junior golfers and provided easy maneuverability around the course.

Greenbaum and Director of photography J.B. Rutagarama worked out a camera-coverage strategy for each player’s journey from the tees to the putting greens during the tournament. They formed camera teams dividing duties among 18 different camera operators. Settings on all of the cameras were matched for a consistent look and each team was provided with the same set of Canon lenses, “which were crucial to obtaining the coverage details and subtle visual esthetics that helped give The Short Game its unique and playful charm,” said Rutagarama.

“The Canon EOS C300 is an incredible camera because it is so small and portable, and does not require a big crew, which could have intimidated our young subjects,” Greenbaum said. “With a short enough lens on the EOS C300 camera you can even steal shots in airports and other places, which is great for shooting a documentary. Also, the low-light capabilities of the EOS C300 camera are a major advantage. When you’re filming a documentary you’re hoping to find truth and honesty, but too many lights can make people very aware that they are being filmed.”

“We chose the Canon EF-S 17-55mm f/2.8 IS USM standard zoom to be on the EOS C300 camera positioned behind each golfer as they teed off, with a longer EF 70-200mm f/2.8L IS II USM telephoto zoom lens on a camera positioned for a 45-degree frontal shot to capture their facial expressions,” Rutagarama explained. “Then another Cinema EOS C300 camera would see where the ball landed, or the 45-degree frontal EOS C300 camera would pan over and try to capture the ball. The camera with the wider EF-S 17-55mm lens that was behind the player would follow the parent and golfer for an emotional reaction as they moved ahead on the course, and the longer-zoom lens operator would run well ahead to set-up a shot of where the ball was for the next shot.”

The Canon Image Stabilization (IS) feature built into both the EF-S 17-55mm and EF 70-200mm was crucial to successful coverage of the tournament portion of The Short Game, Greenbaum and Rutagarama noted. “The IS on the EF 70-200mm is incredible,” Greenbaum said. “J.B. shot a lot of hand-held, and many of the DP’s couldn’t believe that the Canon IS feature worked so well all the way at the 200mm end.”

“It’s such an amazing stabilizer,” Rutagarama agreed. “When you’re filming golf, you’re following a tiny ball and you’re obviously going to be shaking, but I was really impressed by how the EF 70-200mm held steady. The film really happens after the shots – when the kids are reacting to how they just did or talking about what to do next – that was all very much handheld, and the Canon IS feature played a huge part in the success of that footage as well.”

Greenbaum also artistically used Canon lenses to imbue subtle impressions in select sequences of The Short Game. In particular was his use of wide-angle lenses such as the EF 16-35mm f/2.8L II USM ultra wide-angle zoom and the EF-S 17-55 f/2.8 IS USM standard zoom to emphasize the youthful nature of the film’s eight competitors.

“I love the feeling of images captured by our wide lenses because that’s how the world feels to a kid,” Greenbaum confided. “It’s kind of big, dynamic, and exciting when you movethrough space on a wider lens, we used wide two-shots to film the kids walking with their caddy/parent so we could juxtapose the size of the kids with adults and with trees in the background. It makes a visual statement when you see that the kids are the same size as a golf bag.”

The filmmakers drew from a broad selection of other Canon lenses for specific tasks during other parts of filming The Short Game. A Canon EF 100 f/2.8 L IS USM macro lens was used to capture close-ups of golf balls rolling into holes and dramatic shots of gloves being pulled on to young hands before game play. A Canon EF 85mm f/1.2L II USM medium telephoto lens was used for close-up two-camera interviews with legendary PGA golfers.

“The shallow depth-of-field, the way the focus falls off, and the bokeh was so impressive across all of our Canon lenses,” Rutagarama informed. “All of the Canon lenses matched really well, and there was consistency on all the main lenses we used. That was crucial, because you can’t fix that in post. I would be hard pressed to be able to call out exactly which lens we were on while watching The Short Game,”

Greenbaum agreed. “I think that’s another benefit of going with all Canon glass; there is a consistency not only in the sharpness, but even in the color.”

In addition to the inconspicuous form factor and low-light advantages of their Canon EOS C300 Cinema cameras and the versatility of their Canon lenses, Greenbaum and Rutagarama had special praise for the Canon Log Gamma setting, which is capable of up to a full 12 T-stops of exposure latitude to help provide superb quality for creative post production color-grading treatments.

“Canon Log has such a range it’s just incredible.” Greenbaum noted. “I did the color with a major Hollywood posthouse and was able to do so much with their colorist after the fact. The ability to dig into the dark scenes was so critical to our needs. Every kid wore a brim hat or a visor, which cast a shadow over their eyes. Canon Log enabled us to get that range so that we could see not only the bright, sunny parts of the picture but yet also dig into the shadows and show the emotion in the kids’ eyes underneath the brim.”

Post-production workflow for The Short Game went smoothly, the filmmakers report. During the tournament an on-location DIT (digital imaging technician) and his assistant gathered CF (Compact Flash) cards from each of the 18 Cinema EOS C300 cameras every evening to copy and log footage, and then return the cards. Accustomed to working in film and video, Greenbaum soon learned to appreciate the advantages of working with CF media.

“It worked great,” he noted. “The CF media used by the Canon EOS C300 Cinema cameras enables so much more, including quick transfers and inexpensive recording media, which in the documentary world is really helpful. We managed the media quite well and overall we kept it all very, very organized.”