The Short Game to be Released September 20 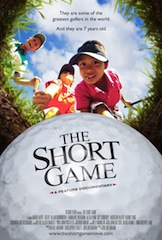 Every year, the best seven-year-old golfers from around the world gather at the world famous Pinehurst Golf course in North Carolina to determine the next world champion and global superstar.  The Short Game follows the lives of eight of the best seven-year-old golfers in the world as they train for and compete in the World Championships of Junior Golf.  In its course, the eight stories entwine to form a fascinating and often funny portrait of a group of very young athletes and their families, in which the narrow-focused, peculiar and highly competitive junior golf subculture becomes both a window into contemporary global society and an inspiring reflection of the human condition.

Greenbaum, a recent father of twin girls, said, "While I'm not a golfer, I've always been fascinated, and perhaps more importantly, incredibly entertained by kids this age. I find their unabashed confidence coupled with their innocent naiveté makes for a very funny combination of inspiration and unexpected wisdom.  And while the film may appear on the surface to be about kid golfers, it quickly becomes about much more."

Executive producers, Jessica Biel and Justin Timberlake added, "We are thrilled to be a part of The Short Game, a film whose message is one of positivity and perseverance – not to mention eight adorable and hilarious kids who can no doubt teach us a few things on the golf course."

Berry Meyerowitz, Phase 4’s president & CEO said, “We are delighted to partner with Delirio Films and Samuel Goldwyn Films to bring The Short Game to audiences nationwide.  It's one of those rare films that parents can take their kids to and both enjoy on different levels.  We have every expectation that moviegoers will be utterly charmed by this inspirational and uplifting movie and will want to watch it again and again.”

The deals with Phase 4 Films and Samuel Goldwyn Films were negotiated by Josh Braun of Submarine on behalf of the filmmakers.