The creative team behind Neon’s She Dies Tomorrow will participate in a panel discussion on October 23 during NAB Show New York’s online conference. The session, which will explore the use of sound and picture finishing to create suspense and emotional tension in feature films, will be available on the main stage channel. 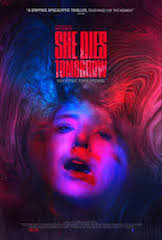 The technologists behind the feature film, now available on streaming platforms, will offer insight on bridging the gap between horror and comedy by juxtaposing sound and silence with flashing colors and intense contrast in the session How She Dies Tomorrow Lives.

Called “one of the most prescient films of the decade,” She Dies Tomorrow employs ambient sounds to ground the surrealist storyline and changing colors and lighting to augment dramatic mood switches between scenes and characters.

Registration for NAB Show New York is available at http://www.NABShowNY.com.