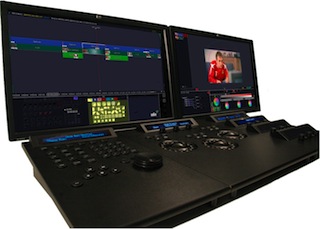 SGO released Mistika v8 earlier this month at the National Association of Broadcasters show in Las Vegas.  Mistika v8 features an advanced and complete color grading toolset. Each one of an infinite number of color correction layers contains every grading tool within the system including: primaries, fixed vectors, custom curves, and Mistika’s own enhanced five ball primary system – bands.

Each layer has a comprehensive range of qualifying tools to allow the selection and fine tuning of even the most challenging keys, along with a myriad of blending modes between vectors within grades, both inside and outside area selections.

Color Tools include primaries, bands, fixed vectors, and curves that can ergonomically be sampled and added via the image being graded.

Filters can be applied to the image as a whole or to individual R, G or B, Luma or Chroma channels, including blur and sharpen, with Boolean operations to control the effect, with a wide range of blending modes.

Mistika Vectors can now reference the image or key from any previous Vector easily.

Colorists can grade an image purely for the purpose of getting the best key possible, then recover either a section of an image or all from anywhere else in their grading stack to use for the grade. This ability to key from one image yet grade in parallel from another image allows colorists to get keys faster and more cleanly without compromising their creative intent. Third party keys can be used. These are not limited to black and white mattes but can also be multiplied R, G, B mattes.

Mistika’s proportional keyer allows for greater control than normal, as once HSL selections have been made the key can be further restricted by grading the key itself. Lift, gain and custom s-curve controls of the alpha channel itself allow colorists to ‘grade out’ unwanted spill to get the cleanest key possible.

Screen Saver linked render farm operation for Mistika Farm and Mistika Totem, to make use of the power of networked Mistika systems when not is use.

This toolset is combined with Mistika’s comprehensive online capabilities and robust open architecture allowing for a truly collaborative and scalable post production solution that can be adapted to meet the specific requirements of any project or facility. Operators need not compromise their ideal workflows as 32 core parallel processing Z820 HP workstations complete with Nvidia Quatro 5000 powered GPUs link to truly open SAS storage that features some of the fastest reading and processing speeds in the industry – allowing post professionals to work natively and in real-time on just about any format including R3D, Arri RAW, Sony, EXR and more.

Output Display Filters allow operators to define any combination of effects to be applied on the video output or to be burned in during rendering. Mistika users can now custom craft their own project display settings for multi-mastering, adding an infinite number of options to re-scaling and framing, Look Up Tables, or any other effect that they wish to add with the press of a button. This feature makes VFX supervision and project versioning a simple yet elegant process, as well as allowing clients to tailor their own ACES workflow to suit the needs of their facility.