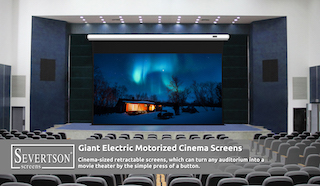 “Opera or playhouses and other bigger than normal venues with a large stage environment are perfect situations for our giant electric projection screens where the screen needs raised and lowered,” said Toby Severtson president, and CEO of Severtson Corporation.

He said the SeVision 3D GX was the first giant electric high quality 3D screen available on the market at these larger cinematic sizes. The giant electric motorized projection screens are available in all offered coatings as well as in non-perf, cinema (standard) perf, and microperf so the soundstage can be placed behind the screen.

“Due to our folded screen technology and coating, it has enabled us to create an electric cinema screen that can be rolled up and down frequently without damaging the screen’s surface,” Severtson continued. “It’s the perfect answer for what was once an impossible scenario for a large format cinematic 3D screen.”