Screenvision Upfront to be Held May 10 in New York City

Screenvision Media has announced that it will hold its 2022 Upfront on Tuesday, May 10 at Hammerstein Ballroom in New York City. The Upfront – Screenvision's first in-person event since the pandemic ground the industry to a halt in 2020 – will reflect the power of the in-cinema experience to effectively deliver, more than any other medium, the reach and impact that brands crave. 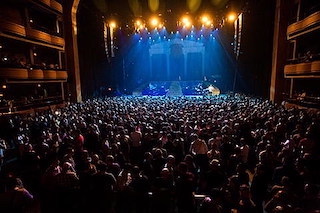 Senior executives from every major media buying agency will be in attendance as Screenvision details the opportunity for brands to engage with the typically elusive moviegoing audience.

"In emerging from the pandemic, we have seen unprecedented enthusiasm for movies as consumers get out of the house and come back to enjoy the immersive 40-ft viewing experience," said Screenvision CEO John Partilla. "At the same time, subscription-streaming services are reporting declining subscribers, further limiting their ability to make up for the linear decline. Additionally, when you consider that cinema beats live sports by nearly 18 million per week*, it becomes easy to see how there is no competitor to cinema's expansive reach and impact."

Partilla will address the industry's unbeatable potential as part of a one-on-one conversation with famed director John Chu. The discussion will include a look at how his recent films have drawn connections to diverse audiences, including: Crazy Rich Asians, the first major studio movie with an all-Asian principal cast in 25 years; In the Heights, which prioritized Latinx representation; and his upcoming film Wicked, which reinvents the musical with Ariana Grande and Cynthia Erivo.

At the conclusion of the event, Flo Rida will perform live.

As part of the industry's comeback, earlier this year Screenvision rebuilt its sales organization to reflect the company's robust inventory both within and beyond cinema. Christine Martino will now oversee national sales for movies, music, sports, and gaming. Gerald Griffin will lead Front + Center Everywhere, which hyper targets audiences regionally/locally in-cinema, as well as in live music and entertainment venues, point of care networks, restaurants, bars, grocery stores, airports, and others.

"The interest from advertisers in returning to cinema is matching the strong returns we are seeing at the box office," added Martino. "They recognize there simply is no substitute for the in-cinema experience and its ability to connect with the highly engaged moviegoing audience."