Screenvision Sports, a division of Screenvision Media, has announced a multi-year agreement to work with Learfield IMG College to introduce first-of its-kind in-stadium content and enable SV Sports to serve as an in-venue media partner for more than 100 schools. 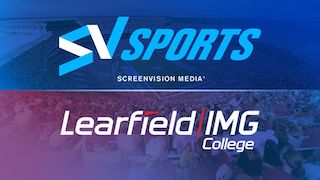 "We are proud to work alongside the athletics multimedia rightsholder for some of the most iconic college brands in the U.S. – our relationship provides advertisers with the opportunity to reach passionate college football and basketball fans at scale," said Eric Krasnoo, senior vice president, business development, SV Sports. "With the anticipation of fans returning in greater numbers in the second half of 2021, SV Sports and Learfield IMG College are well positioned to engage advertisers with this unique opportunity."

SV Sports will produce a three-minute segment that includes contextually relevant content and advertising to entertain fans pre-game or at half-time, which will be broadcast in stadiums and arenas nationwide. The participating universities will also have access to advertise on Screenvision's exhibitor network, which spans more than 2,000 locations and 14,000 screens.

"We have been intently focused on what the new game day might look like post-pandemic, and we knew SV Sports was an innovative company that would produce first-class content to captivate and engage fans," said Rick Barakat, Learfield IMG College executive vice president/managing director – media and partnerships group. "As universities look to welcome back larger groups of fans to their campus stadiums and arenas for game day next season, we felt this partnership would help further engage those fans, while also extending the reach and messaging of our school partners into cinemas across the country."