Screenvision Media today announced that Indeed will take over the entire Screenvision Front + Center pre-show to debut the company's Rising Voices films during the weekend of July 22-24. Indeed's Rising Voices, which aims to discover, invest in and amplify stories created by Black, Indigenous, and People of Color filmmakers and storytellers, will rotate the 10 films, with audiences seeing one film and exclusive behind-the-scenes content during Screenvision's pre-show. 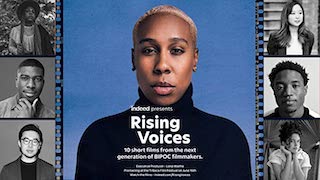 A QR code will also appear on screen, which enables moviegoers to access the full library of Rising Voices Films.

"Indeed has been a longtime partner of Screenvision, recognizing the power of the big screen to showcase the talent and stories of previously under-represented voices," said Christine Martino, Screenvision Media chief revenue officer. "We know that moviegoers are diverse and want representation on the big screen."

A 2021 study found that films in which 41-50 percent of casts from minority groups had the highest median global box office receipts. Additionally, people of color accounted for the most opening weekend domestic ticket sales.

In what marks the first time a brand has sponsored the entire preshow, moviegoers will enjoy the 10 Rising Voices shorts across 100 theaters within Screenvision's sprawling exhibitor network, including the renown TCL Chinese Theater in Los Angeles.

"We are proud to exclusively bring Indeed's Rising Voices program to the 40-foot screen and shine a spotlight on the work from these outstanding filmmakers," added Martino.

"At Indeed we believe that talent is universal, but opportunity is not,” said Indeed CEO Chris Hyams. “Rising Voices is living proof of the power of bringing opportunity to underrepresented talent. For a filmmaker, there is no greater opportunity than seeing their work on the big screen. We are thrilled to partner with Screenvision to bring these dreams to life, and to share these amazing stories with audiences across the country."