After achieving critical acclaim during an award-winning tour of global film festivals, Image Nation Abu Dhabi’s feature film Scales (Sayidat Al Bahr) will be screening in cinemas in Saudi Arabia this week, after it was picked up by Saudi distributor Cinewaves Films. Viewers will be able to experience the debut film from Saudi Arabian writer-director Shahad Ameen in cinemas across Riyadh, Jeddah, Tabuk, Jizan and the Eastern Province in its first theatrical release. Ameen attended the film’s Saudi Arabian socially distanced premiere at AMC cinema in Riyadh, accompanied by the film’s stars Yagoub Al Farhan and Basima Hajjar. The screening was followed by a live Q&A session between the cast of the film and a variety of well-established filmmakers, critics, media and cinema enthusiasts.

Scales explores the changing role of women in society through the poetic story of Hayat, a young girl who refuses to be sacrificed to mysterious sea creatures by her village. The black and white film follows the unfolding social, family and personal consequences of Hayat’s choice to defy tradition and walk her own path.

Scales premiered in 2019 at the Venice International Film Festival Critics’ Week, where it won the prestigious Verona Film Club award for its innovative filmmaking, and has since been shown at more than 10 competitive global festivals in cities such as London, Los Angeles, Carthage, Cairo and Singapore where it was awarded Best Picture. 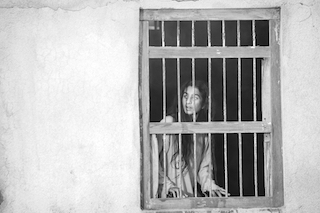 “Scales explores universal themes of belonging and self-determination, but as a Saudi Arabian filmmaker, I feel it has a special significance for audiences in my home country,” said Ameen. “Through an allegorical tale, the film reflects on experiences that many women around the world have lived through, with a message of empowerment and independence that resonates with the region’s cultural and creative evolution, so I am delighted that its first cinema release in the world will be in Saudi Arabia.”

Scales was produced by Image Nation Abu Dhabi, the award-winning film and entertainment company which has built its reputation on breaking boundaries and unleashing imagination. With a strong track record of producing high-quality productions through a combination of local talent and international expertise, Image Nation’s successes have spanned the globe, and it counts two Academy Awards, a BAFTA and an Emmy as well as more than 400 screenings at prestigious film festivals among its honors.