As Alamo Drafthouse moves closer to the opening of its Downtown Brooklyn theater, the company is pleased to announce the addition of Mike Sampson to its New York City team as senior marketing and promotions manager.  Along with New York creative manager & programmer Cristina Cacioppo, Sampson will be a key member of the team guiding and executing the creative vision for Downtown Brooklyn, as well as future NYC venues. 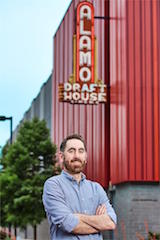 Sampson comes to the Drafthouse with more than 15 years experience in New York City as a writer and editor covering the film industry. He is the founder and former editor-in-chief of ScreenCrush, an industry-leading authority on film and one of the fastest growing movie, television and pop culture sites since its launch. Sampson was also the editor-in-chief of the popular movie fan site JoBlo.com from 2000-2012. He was recently listed as one of the most influential U.S. film journalists on Twitter and is a member of the Broadcast Film Critics Association.

“Mike is exactly what we were looking for in an addition to the NYC team, his deep industry experience and passion for film make him a perfect fit,” says Alamo CEO and founder Tim League. “We really couldn’t have found a more ideal candidate, and I’m very pleased he’s on board to launch our new flagship location along with Cristina.”

Sampson has counted himself a fan of the Drafthouse ever since his first experience, a visit to Fantastic Fest in 2007 that included screenings of Nacho Vigalondo’s Timecrimes and Paul Thomas Anderson’s There Will be Blood. And later, in 2011, a Fantastic Fest screening of You’re Next would become one of Sampson’s favorite moviegoing experiences of all-time.

“I've been anxiously awaiting their arrival in New York City,” says Sampson. “Now, I'm beyond thrilled to be working alongside Cristina, Tim and the rest of the Alamo team making that dream happen in Brooklyn. I can't wait to bring the Drafthouse's exciting mix of programming and an incredible moviegoing experience to all my fellow movie fans in the NYC area.”