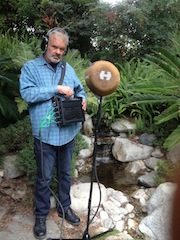 Roland Systems Group in cooperation with DTS and Holophone microphones demonstrated 3D recording and monitoring for sound designers and location recordists earlier this month at the National Association of Broadcasters show in Las Vegas. A challenge for sound designers in the field is monitoring the surround audio being captured. Through headphones they are able to monitor each channel of a surround image as well as a summed stereo image but not the resultant 3D image. Up until now, to truly hear what was captured in context, they had to wait until they were back in the studio playing the channels through a multi-speaker surround configuration. Now with the advent of DTS Headphone:X, sound designers can turn a pair of headphones into an impressive personal surround system.

The surround recording and monitoring demonstration consists of a Holophone H2-Pro 7.1 Microphone feeding a Roland R-88 8-channel field recorder which in turn is connected via USB to a PC running a plug-in for DTS Headphone:X technology.

Because the Roland R-88 is also an USB audio interface, while it is recording the 7.1 audio data it can simultaneously send all eight channels to a PC for backup recording or in this case, to be further processed using the DTS Headphone:X technology. With an A/B headphone switch, the user can switch between monitoring the individual channels or stereo image on the R-88 or the real-time surround image via DTS Headphone:X.

With more than forty years of film audio experience, award-winning feature film sound designer Frank Serafine has been proving this 3D audio workflow for the last 18-months, working on a documentary film called Awake. He has been recording 7.1 audio for 3D/surround sound using the Roland R-88 field recorder and Holophone H2-Pro microphone. DTS’s Headphone:X technology plug-in then allows him to hear the 3D audio in headphones on the spot.

Serafine says, “I have been waiting many years for 3D surround sound. Never in my forty years of working with cutting edge audio technologies on films such as Star Trek, Tron, and the Hunt for Red October has this type of serious sound perspective been so convincing. To be able to actually hear accurate and precise 3D surround out of a pair of headphones is truly amazing.”

The DTS Headphone:X is in beta now. The company offered no word yet on when it will be available for purchase.