Géke Roelink, managing director of Filmhuis Den Haag, has been named the 2022 recipient of the UNIC Achievement Award, given each year in recognition of outstanding dedication and service to European cinema exhibition. The award will be presented as part of the CineEurope Awards Ceremony on Thursday 23 June at the Centre de Convencions Internacional de Barcelona in Barcelona, Spain. 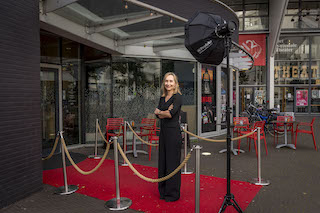 Welcoming the announcement of the award, Phil Clapp, president of the Union Internationale des Cinémas/International Union of Cinemas said, “We are absolutely delighted to honor Géke at CineEurope 2022. The award recognises her incredible passion for the Big Screen, her outstanding career path, and her key role in developing both the Dutch and European cinema-going experience. On behalf of the UNIC board and colleagues from across the industry, I would like to congratulate Géke for this wonderful achievement.”

Roelink has dedicated her career to bringing communities together through the Big Screen experience. A key figure in the Dutch cinema industry for over 20 years, she has been the managing director of Filmhuis Den Haag since 2011. Under her leadership, the arthouse cinema located in The Hague has become one of the most successful cinemas in The Netherlands with around 320.000 visitors a year including 20.000 students and pupils.

Roelink believes that films and cinema-going play a crucial role in social inclusion and are pivotal to a harmonious society. Her efforts have put Filmhuis Den Haag at the centre of The Hague’s cultural life and transformed the local cinema into a hub for social and cultural exchange, something recognised when Filmhuis Den Haag received the Europa Cinemas Award for Best Programming in 2015.

Roelink specializes in film programming, marketing and cultural management. She studied at the Royal Conservatory in The Hague and at the Amsterdam University of Arts and also completed a leadership programme at de Baak as part of her leadership development.

Her previous roles have included director of presentation at the Eye Filmmuseum (2002-2010) and Head of Marketing Communication and Study Information at the University of Amsterdam (1998 – 2002). She has also held a variety of Non-Executive Director and board level positions. Among other positions held, she was a board member of the Netherlands Union of Cinemas for more than seven years.

Currently, Roelink is also an advisor to the Netherlands Council of Culture and a Supervisory Board Member of the Imagine Film Festival in the Netherlands. She has also been a mentor in the UNIC Women’s Cinema Leadership Program.