Rising Sun Pictures has won the 2020 Australian Academy of Cinema and Television Arts Award for Best Visual Effects or Animation for its work on the Chinese World War II epic The Eight Hundred. The Adelaide-based studio helped to recreate the 1937 Battle of Shanghai, where a small Chinese army mounted a determined defense against a larger invading army. Directed by Guan Hu and produced by Haining Seventh Image Movie & Media Co Ltd, The Eight Hundred is among the most successful Chinese movies ever made, and the highest grossing film globally for 2020, having earned $446 million (RMB 3.02 billion) in total box office. 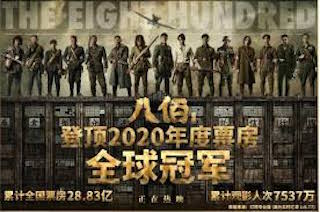 “This was a remarkable project for RSP and the result of inspired work from our very talented team of artists, producers, technical specialists and support staff” said RSP managing director Tony Clark. “It is a great privilege to have their creativity and efforts recognised by their peers in the Australian film community. We are grateful to the filmmakers for entrusting RSP with their extraordinary vision, and the Academy and its members for this unique honour.”

As one of the principal visual effects providers for the film, RSP contributed scores of richly detailed, seamless visual effects to support the film’s riveting combat scenes, all set around a warehouse complex near Shanghai’s city centre. Highlights of the studio’s work included a lengthy sequence representing the battle’s decisive third day, when Japanese forces unleashed an aerial attack on Chinese soldiers stationed on the roof of the massive warehouse.

Another scene involved a dreamlike flashback to an ancient Chinese battleground, a reference to an event in history that’s very well known in Chinese culture. With the exception of a single warrior on horseback, the scene is entirely computer generated including the environment and army of soldiers.

The studio’s team created CG set-extensions, showing the ruined city of Shanghai to augment production footage of the practical warehouse set. This included thousands of individual buildings and other structures, many in ruins, as well as debris, fire, smoke, snow and other atmospheric elements. Additionally, RSP created fighter aircraft and an airship as well as a CG horse running through the interior of the warehouse.

RSP was also nominated for an AACTA Award for its work on Ford v Ferrari, from 20th Century Studios and directed by James Mangold. The team, led by VFX supervisor Malte Sarnes, produced 223 visual effects shots for the film, the majority for an eight-minute sequence depicting the first 24 Hours of Daytona race in 1966. Artists created a historically accurate digital replica of the famous speedway and filled it with cheering fans.