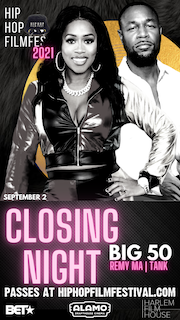 The Hip Hop Film Festival will feature industry powerhouses to its final round of Master Cyphers. Detavio Samuels, CEO of the Revolt Networks, will participate in the We Run This Master Cypher on August 30 in the Harlem Film House Metaverse.

“The addition of Big Fifty and Datavio Samuels to our festival offers attendees even more content and insight about the future of cinema and streaming,” said CR Capers, CEO of the Harlem Film House and Hip Hop Film Festival. “In addition, sharing diverse voices from within the culture is so important. Not enough organizations, film festivals or media platforms are doing this at the right level. The Hip Hop Film Festival is a step toward filling that gap.”

The Hip Hop Film Festival culminates with the closing awards ceremony on September 3 in the Harlem Film House Metaverse. The festival will award the distinction of Best of the Fest in over 21 categories including Best Feature, Best Documentary, Best Web Series and more. The year, the festival is dedicated to rapper, singer, actress, producer, and entrepreneur Queen Latifah.  She has been named as this year’s G.O.A.T.

For more information and to get festival passes, go to hiphopfilmfestival.org