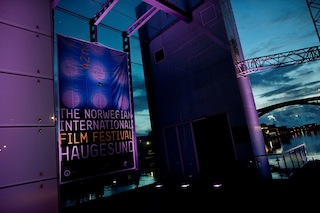 Most of the films are screened at Edda Kino, which has five theatres. QSC Cinema products are installed in four of the venues, including the DCP 100 and DCP 300 digital cinema processors and DCS loudspeakers.

“Regular everyday operation of the cinema is made much easier with the QSC DCP processors, a product that communicates perfectly to our existing digital systems,” says Thor Vidar Hjelmervik, the festival’s technical director. “They are incredibly easy to operate, both from booth and from the TMS system we use. Channels and presets can be programmed to our specific needs during a busy festival but also for our rentals.”

Installation and system commissioning was done by Videvox, a full-service cinema products dealer based in Sweden with offices in Norway. The Videvox team was led by key accounts manager Ulf Quicklund.  Despite the grueling schedule of 250 to 300 screenings within the period of just a little over a week, all went off smoothly without any problems. Hjelmervik says, “I cannot praise them enough; Videvox is a company with true and proper professionals.”