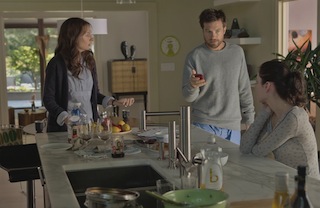 According to Stipan, the finished look of the film mirrors its narrative structure. While the overall look is cold, almost icy, subtle differences distinguish its three plot threads. “Henry did not want it to look like a typical film,” Stipan said. “We gave it a soft contrast look, but we also built in some richness and depth. After softening the contrast, we added color saturation and popped the highlights. The color palette ranges from warm yellow and red to saturated green and blue.”

The film opens with the TV reporter talking over the web to Kyle, who describes his job as a sex chat worker. The scene then shifts to a mall where a pair of young skateboarders is planning a prank. “The scenes with the sex chat guy are dark, but warm and green or red depending on the time of day,” Stipan said. “The scenes with the couple victimized by identity theft are predominantly yellow and red. The scenes with the kid and his skateboarder tormentors are more natural. The look is clean and sharp contrast—but it’s all done within the parameters set by the director.”

Stipan said Seng created interesting optical effects by placing glass in front of the camera lens. Glass sometimes covers only a portion of the lens causing part of the resulting frames to appear softer or slightly out of focus. For audiences, the effect creates the feeling of eavesdropping on the subjects.

“It’s a very interesting look,” Stipan said. “There is something constantly going on in front of the lens.”

Stipan said that such camera techniques along with the grade that was applied in his suite at Technicolor-PostWorks add to the dramatic tension and atmosphere of alienation that pervades the film. “It’s a very emotionally powerful film,” he said. “Everyone who sees it is left with tears in their eyes—men and women. It’s a very interesting film.”