Positron unveiled a new scent application for its Voyager cinematic virtual reality chair during a sneak peek at two-time Oscar and Grammy winner A.R. Rahman’s upcoming VR musical Le Musk at the National Association of Broadcasters convention underway in Las Vegas. Rahman is the first director to take advantage of commissioned scents on the platform. 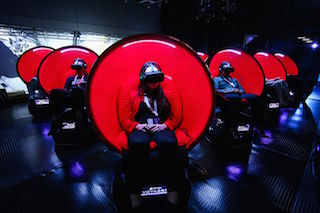 “As a storyteller, I’m thrilled to have access to an additional sensory tool that has the potential of deepening the emotional meaning of the story with the audience,” said Rahman. “Utilizing Voyager’s features to offer a truly unique multi-sensory VR experience in Le Musk has been a rewarding creative journey I look forward to sharing.”

“Our vision for Voyager is to be a platform that always delivers the best-in-class, premium cinematic VR experience,” added Jeffrey Travis, CEO, Positron. “Voyager has incorporated haptic feedback, 3D spatial audio, and motion to the VR experience from the beginning.  By now adding scent dispensing, VR creators can cue scents to be released at various times during an experience, adding a whole new level of emotional engagement.”