The next edition of Post Break, the free webinar series from Post New York Alliance, will feature an in-depth interview with Brian Pohl, academic dean of Epic Games’ Unreal Fellowship and an expert in the expanding field of virtual production. 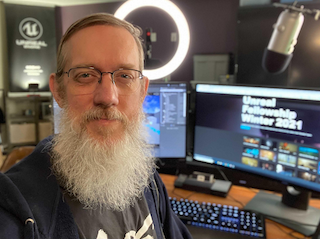 Ben Baker, a partner in NextGen Production and chair of PNYA’s Education Committee, will join Pohl in a conversation about his career, Unreal Fellowship and what post-production professionals need to know about virtual production.

Virtual production and the use of game engines in creating dynamic environments has captured the imagination of the film and television industry.

Unreal Engine is the primary technology driving this new production technique. Unreal Fellowship, launched by Epic Games in 2020, is an intensive training program in virtual production for experienced media and entertainment industry professionals. Over the course of the five-week program, each participant produces a complete, animated short.

The session is scheduled for Thursday, June 10 at 4:00pm EDT. Following the webinar, attendees will have an opportunity to join small, virtual breakout groups for discussion and networking.