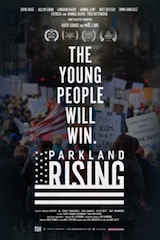 Executive producer Katie Couric said, "This film takes people on a journey and helps them understand what it feels like to be on the inside of a movement, spawned by unimaginable tragedy and trauma. It takes time to unfold, and you can’t watch it without becoming emotionally invested."

Executive producer will.i.am added, “Guns in the hands of disturbed persons are a lethal combination, responsible for the senseless loss of many innocent lives. School shootings, domestic violence, suicides and racially motivated hate crimes are all on the rise, as are the sale of guns to unqualified individuals who should never be allowed to buy or possess a deadly weapon. Out of the Parkland tragedy arose a new generation of activists who are leading the crusade for uniform background checks and licensing laws across all 50 states. I salute the hard work that the Parkland survivors are doing, serving as the ‘adults in the room’ when lawmakers continue to offer only ‘thoughts and prayers.’”

Fred Guttenberg said, “Since the coronavirus outbreak began, gun sales have skyrocketed to an all-time high in the US potentially putting millions of new deadly weapons into unlicensed, untrained, unsafe hands. Now more than ever, we must take action on the issue of gun violence to prevent the kind of tragedy my family experienced in Parkland. I'm glad this powerful film will be available for all American voters to learn what we went through and to inspire more people to join the fight for change.”

Parkland Rising documents the teen-led gun reform movement as it unfolds with a wealth of raw and illuminating content. We witness their grassroots efforts to get the gun lobby out of politics by turning out record numbers of youth voters while facing gun-carrying counter protesters, an onslaught of online vitriol, and even death threats. Through intimate verité storytelling, Parkland Rising reveals the ways that ordinary citizens rose together in an extraordinary effort to end mass shootings in the country.

Abramorama CEO Richard Abramowitz and COO Karol Martesko-Fenster said, “Parkland Rising continues to be essential viewing even in the midst of the current pandemic. Cheryl’s work in documenting these astonishing activists – both students and parents – has the capacity to change a lot of minds. We’re proud to help make it available as an ABCinemaNow offering to the largest possible audience at a time when inspiring leadership is more necessary than ever.”