According to Fandango, South Korean genre-bending hit Parasite is the top pick in the Best Picture race with 20 percent of the film fans’ votes, followed closely by Sam Mendes’ WWI epic 1917 with 19 percent. Parasite also took the number-one spot in the Best Director category, with first-time nominee Bong Joon Ho winning with 34 percent of votes. 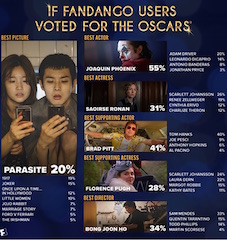 During the last few days leading up to the Academy Awards, Fandango surveyed more than 2,000 moviegoers, asking them which Oscar-nominated films and performers deserve to take home the Oscars this Sunday.

The popularity of this year’s nominees is generating interest for Oscar tune-in, with eighty-eight percent of Fandango fans saying they’re planning to watch Sunday’s show because they have seen most of movies in contention this year.

“Fans are more excited to watch the Academy Awards because they’ve actually seen the nominated movies,” says Fandango managing editor Erik Davis. “This year’s Oscar races for Best Picture and Best Director are the most suspenseful, and if the Fandango polling is any indication, it’s going to be awfully close, with Parasite and 1917 neck and neck in the voting for both categories. Moviegoers are also rooting for fan favorites like Joker, Little Women, Once Upon a Time…in Hollywood, Knives Out Toy Story 4, and Rocketman, all of which figured prominently as winners in the Fandango survey, ranking as the top choices for Actor, Actress, Supporting Actress, Supporting Actor, Adapted Screenplay, Original Screenplay, Animated Feature and Original Song.”