The Orchard Acquires Rights to Harmontown 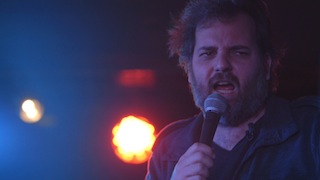 The Orchard has acquired theatrical and digital rights spanning North America and the U.K. to Harmontown. The documentary, directed by Neil Berkeley (Beauty Is Embarrassing) and co-produced by Future You Pictures and Starburns Industries, follows Community creator and writer/producer Dan Harmon on tour for his eponymous podcast series. The film features appearances by Jack Black, Ben Stiller, Sarah Silverman, Jason Sudeikis and Joel McHale -- among other A-list comics -- and will be released by The Orchard theatrically and digitally this fall.

A kindred spirit to nerds everywhere, Harmon has achieved celebrity via Community, but cut his teeth writing for shows such as The Sarah Silverman Program and the Jack Black/Ben Stiller pilot Heat Vision and Jack.

After being fired from the hit series he created, Harmon takes his writing on the road in Harmontown and performs live podcasts for his cult-like fan base across the country. Known for his wit, cynicism, genius and self-deprecation, the film initially begins documenting Dan’s fandom, and progressively evolves into a deeper character and case study.

"Harmontown is a fascinating glimpse into the mind of a man that would quote himself saying that a movie about him is fascinating,” says Harmon. “It's more than a documentary. It's your chance to figure out what's wrong with me while cutting me in on the profit."

Harmontown originally premiered as part of the Documentary Spotlight at the South by Southwest Film Festival, and continued with limited, special engagement screenings at Hot Docs and the Los Angeles Film Festival. Screening to critical acclaim, Harmontown has been lauded by critics like Oliver Lyttelton of The Playlist, who called the film “unexpectedly moving” and Harmon “a legitimately fascinating unlikely superstar.

Echoing the structure of the film – the chronicling of Harmon’s podcast tour – Harmon will embark upon another podcast tour in concert with Harmontown’s theatrical expansion.

“It’s exciting to know that the world will finally get to see this movie and that our incredible partners, The Orchard, are going to make that happen,” says executive producer, Joe Russo II. “From the first conversation we had with them, we knew that they had the energy and understanding of our audience to make the release a success. The movie is in good hands, and we can’t wait for the world to see it.”

“Sometimes, getting fired results in amazing opportunities. In the case of Dan Harmon, it resulted in the engaging and hilarious pop culture-infused doc Harmontown,” says The Orchard’s SVP of Film & TV, Paul Davidson. “Here at The Orchard, where Harmon-fanaticism runs rampant, we’re proud to be bringing Dan’s rollicking roadshow to his fans everywhere."

The deal was negotiated by UTA Independent Film Group and Josh Braun of Submarine on behalf of Future You Pictures and Starburns Industries with Danielle DiGiacomo of The Orchard.

About Future You Pictures

Future You Pictures is a Los Angeles film and television production company founded in 2009 by Neil Berkeley. Harmontown is the company's second feature documentary production.   Berkeley's first feature, the critically acclaimed documentary Beauty Is Embarrassing, premiered at SXSW in March 2012. The company is currently developing a roster of television and film projects.  Future You Pictures is one of several companies controlled by The Berkeley Company, LLC, which also owns BRKLY, a design based production company focusing on brand development and marketing for television, film and commercials.

The Orchard is a pioneering music, video and film distribution company and top-ranked Multi Channel Network operating in more than 25 global markets. With a holistic approach to sales and marketing combined with industry-leading technology and operations, The Orchard amplifies reach and revenue across hundreds of digital, physical and mobile outlets around the world. The Orchard streamlines content owners' business complexity with an intuitive client dashboard, comprehensive rights management and tailored client support. Founded in 1997, The Orchard empowers businesses and creators in the entertainment industry. For further information, please visit www.theorchard.com.