Occupy Cannes Documentary in the Works from Troma Entertainment 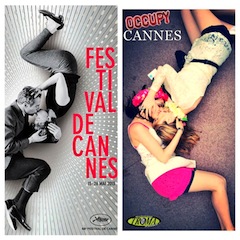 Occupy Cannes attended the Cannes Film Festival to fight for the rights of independent artists and to call attention to the danger that international media consolidation poses to independent art and commerce. Four camera teams filmed material for an upcoming documentary about the Cannes Film Festival to be released by Troma, appropriately titled Occupy Cannes. The movement communicated its message to the festival through a series of highly publicized events, including:

Daily parades featuring the classic Troma characters such as the Toxic Avenger, Sgt. Kabukiman NYPD, along with the stars of Lloyd Kaufman's Return to Nuke 'Em High and volunteers from all over the world. The group chanted idealistic slogans and created wonderful street theater.

A press conference in front of the Carlton Hotel, where the mission statement of Occupy Cannes was communicated to the international media.

As a symbol of the rebirth of independent art and uncovering unknown talent, Return to Nuke 'Em High star Zac Amico ripped off his clothing and ran in front of the Palais de Cinema.

To symbolize the democratization of cinema, the citizens of Cannes were invited to appear in a scene for Return to Nuke 'Em High: Volume 2 where they mutated and melted down. Many of the festival's camera operators shifted away the same old celebrities on the red carpet and happily trained their lenses on this wonderful symbol of artistic expression.

"New technology has democratized cinema so that there are now multitudes of independent artists who are making wonderful moving pictures," said Kaufman. "Mainstream festivals like Cannes and the distribution machinery have not caught up and are still living in an age of cartel-ism and oligopoly. Occupy Cannes was organized to bring this matter to the attention of the world media and film fans everywhere."

The evidence that Occupy Cannes took root with the good citizens of Cannes was apparent when Kaufman was rejected from the screening of Ethan Coen's movie at the Grand Théâtre Lumière for wearing the wrong color tuxedo.  The crowd of onlookers became upset and would have caused a major confrontation had Kaufman not asked them to be peaceful.

"We're here at the Cannes Film Festival with our serious political events and our symbolic street performances to try and open people's eyes to the fact that it's very hard to be an independent artist right now in this media climate," Occupy Cannes director Charlotte Kaufman explained through a megaphone during the movement's press conference in front of the Carlton Hotel.

Kaufman, who has been attending the Cannes film festival for over 40 years, has witnessed the festival transform from an idealistic festival, which embraced new talent to one that favors the Hollywood elite and red carpet glam. The Occupy Cannes documentary will explore this transformation, which is a trend that has been dominating the media industry at large.

"I slept on the beach in 1971," Kaufman told the press in an interview at Cannes. "I had

Sugar Cookies here, one 35mm film. I had two cans, I rented theaters but I didn't have money for a hotel. I slept on the beach. The Palais loved it, the people of Cannes loved it; it was a festival. They were discovering people. An independent company could put leaflets, we could walk into hotels, put leaflets under all the doors. We could put leaflets on all the cars that were parked. They were interested; they encouraged someone who was unknown. Nobody knew who Troma was...but they encouraged it. Today, the Cannes Film Festival is the exact opposite. Unless you're Leonard DiCaprio, you can't brush your teeth without the Cannes private police force threatening you. Is this a film festival or the Vatican?"

The expedition to the Cannes Film Festival was made possible by the generous donations from roughly 400 supporters from around the world. It was due to their support that volunteers from all corners of the world, including Iceland, Japan, Italy and Spain were able to live in Cannes and join the Occupy Cannes movement on the streets.

For photos, videos, and press coverage of Occupy Cannes at the 2013 Cannes Film Festival, visit www.occupycannes.tumblr.com.