Nugen Audio has released Version 1.1 of its 3D-compatible convolution reverb plug-in, Paragon. Included among the updates is the addition of outdoor impulse responses and improved balancing of early reflections. Version 1.1 also features new presets and an improved browser, with search, tagging and favorite functions. Unlike any other convolution reverb on the market, Paragon offers full control of the decay, room size and brightness via state-of-the-art re-synthesis modelled on 3D recordings of real spaces. 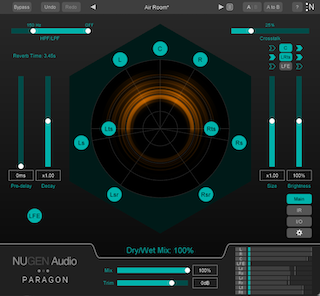 Perfect for film scoring applications, Paragon provides an unprecedented level of tweak-ability, with zero time-stretching – which means no artifacts. Additionally, the plug-in features spectral analysis and precise EQ of the IRs. With purity of sound at the forefront of this plug-in, Paragon reverb operates in up to 7.1.2 channels of audio, making it ideal for surround and immersive audio applications, including Dolby Atmos bed tracks. Further, it features individually configurable crosstalk per channel, unique technology for re-synthesis of authentic IRs, HPF and LPF per channel, and switchable LFE.

In addition to its Atmos application, Nugen Audio’s Paragon reverb plug-in is well-suited to creating immersive reverb in mono, stereo and surround formats. It is ideal for recreating authentic sounds of real spaces and manipulating IRs while still maintaining true convolution characteristics.

“Paragon has been incredibly well-received by the film and TV industry since its release last autumn,” says Nugen Audio product specialist Freddy Vinehill-Cliffe. “That said, we’ve listened to feedback from our friends in the industry and found that outdoor IRs and presets were the main feature request we’ve had since originally releasing the software. These elements are especially important to people working on movies and TV shows with exterior scenes, which is found in nearly every production. Additionally, the new preset browser makes it easier for users to organize their presets, which further expedites the creative process.”

Nudio Audio Paragon is currently available for $599 plus tax at nugenaudio.com/paragon.