Nightmare on Elm Street Artifacts to be Auctioned May 8

Freddy Krueger and the Nightmare on Elm Street film series have been haunting horror film lovers for forty years. One of the people behind this successful iconic movie was Bill Terezakis, the visual effects master who created the Freddy Krueger double full body burn and the claw gloves among many other things.

This coming May 8, Direct Liquidation will be offering more than 800 lots of original Terezakis creations for auction live and online. 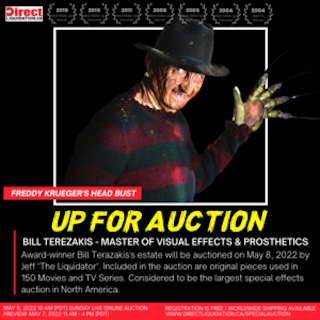 Collectors and fans all over the world will be able to bid for through an online live streaming auction that will start at 10:00 a.m. PDT. This is a rare opportunity to own some iconic film and TV artifacts from the Bill Terezakis' estate.

Freddy crossed paths with fellow horror icon Jason Voorhees in Freddy vs. Jason in 2003. It is a crossover between the Nightmare on Elm Street and Friday the 13th series.

Freddy vs. Jason grossed over $116 million worldwide, making it the highest-grossing film in each series since it was released on August 15, 2003.

A great deal of workmanship and attention to detail went into this film thereby giving it that nostalgic horror effect that will not be forgotten by this generation. Terezakis was nominated and won several awards and recognitions for his work in the film and TV industry.

Click here for more information about the auction and to register to participate www.directliquidation.ca/specialauction.