National CineMedia and Harkins Theatres, the fifth-largest exhibitor in America, have signed a long-term cinema advertising affiliate agreement to bring NCM’s Noovie pre-show entertainment program to millions of Harkins movie fans across the Southwest. With the addition of Harkins Theatres, NCM’s national theatre network now includes all of the top five exhibitors in the country. 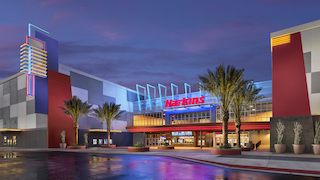 With more than 500 screens, Harkins Theatres is also the largest independently owned theatre company in the country, delivering Ultimate Moviegoing for more than 87 years. Harkins operates 33 premier theatre locations in Arizona, California, Colorado and Oklahoma, and will now present NCM’s premium Noovie entertainment pre-show on all of its screens. Noovie, hosted by Maria Menounos, gives movie audiences a reason to arrive at the theatre early to discover what’s next in entertainment, with exclusive content, in-theatre gaming, and engaging advertising from national, regional and local brands.

“We are very excited to embark on this new partnership with NCM and introduce the Noovie program to our guests. This agreement represents further evidence of the resilience and growth opportunities for the cinema industry,” said Harkins Theatres CFO and senior vice president Tyler Cooper.

Harkins joins NCM’s network at an optimistic time in both the movie and advertising industry. The 2021 film slate is stacking up for a big summer, fall, and holiday movie season following the COVID-19 vaccine roll-out.  Meanwhile younger audiences are continuing to abandon ad-supported television and audiences of all ages are eager to get off the couch and get back out to the movies. For brands seeking to reach this highly-sought-after 18-49 and 18-34 audience demographic, cinema is still an attractive entertainment choice.