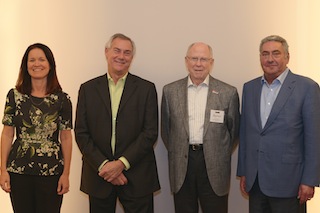 The National Association of Theatre Owners has named new officers to two-year terms. The officers were selected by the executive board of directors at the association’s annual meeting, October 2-3 at the Park Hyatt hotel in Washington, D.C. Prior to the meeting, on October 1, NATO members took part in Hill Day visits to senators and representatives on Capitol Hill, even as the federal government shut down over political gridlock.

NATO president and CEO John Fithian said, “On behalf of our members, I want to thank our outgoing officers and executive board members and our new officers and board members for their service. NATO is only as strong as its volunteer leaders and we are fortunate to have the dedicated service of the most talented people in our industry.”

The 17-member executive board of directors is the governing body of NATO.

Despite the government shutdown, NATO members also met with key legislators and their staffs to discuss exhibitor concerns and interests, ranging from the implementation of new health care regulations to access for disabled patrons, enforcement of the voluntary ratings system, and rules regarding upcoming laser projection in cinemas.