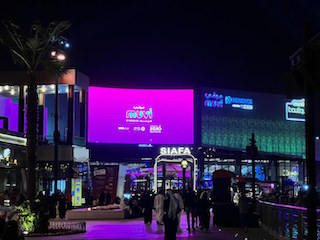 Sultan Al-Hokair, founder and CEO of Muvi Cinemas, told the Arab News, “As the largest movie theater in Saudi Arabia, our customers will experience best-in-class entertainment experiences while enjoying the latest cinematic technologies.”

The cinema opened with 25 screens and includes a wide range of offerings including 4DX active seating from CJ 4DPlex that promises to give moviegoers an immersive cinematic experience.

The cinema is also the biggest in the world in terms of the number of seats it offers, according to the organizers.

Established in 2019 in Jeddah, Muvi Cinemas now has 21 theatres across the Kingdom and 195 screens.

A selected list of specially invited guests and officials from various industries attended the opening ceremony and screening of The Batman starring Robert Pattison and Paul Dani.