MTI Film has released DRS Nova 2.3, an upgrade to its software for digital film restoration. The new release includes a host of new and enhanced features created in response to requests from restoration professionals worldwide. All are aimed at making such tasks as dust busting, image stabilization and de-warping faster and easier. 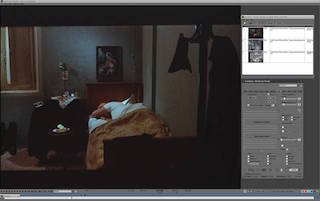 “We listened to people who use the product every day,” said MTI Film director of product development Randy Reck. “This latest release is focused on streamlining routine tasks and making the software more responsive to the way artists work.”

New features of DRSNova 2.3 include offset tracking for image stabilization. It allows users to track objects even when tracking points move beyond the boundary of the frame. The feature makes it simpler to stabilize shots with camera movement or complex motion. The same functionality will soon also be available for de-warp operations.

Pan, zoom in and zoom out via a mouse button.

Generate dirt maps utilizing data from the alpha channel of a film scanner.

Save used settings and perimeters for routine tasks.