The Motion Picture Sound Editors association has announced nominees for the 66th Annual MPSE Golden Reel Awards. Nominees represent the work of the world’s most talented sound artists and their contributions to the past year’s most outstanding feature film, television, animation and computer entertainment productions. 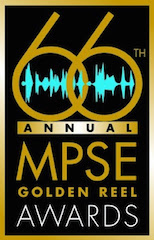 “Sound artists continue to push boundaries for artistry and technical achievement in entertainment sound,” said MPSE president Tom McCarthy. “This year’s nominees represent the best work in sound across films, television, games, documentaries and other media. On behalf of The Motion Picture Sound Editors, I would like to congratulate all the nominees for their outstanding contributions to the art of sound.”

Tickets to the 66th Annual MPSE Golden Reel Awards may be purchased here.