The Motion Picture Sound Editors will draw on the most accomplished sound artists of its past in celebrating the best in sound editing of the present at the 69th Annual MPSE Golden Reel Awards. Five past recipients of the MPSE’s Career Achievement Award will serve as presenters during the Golden Reel Awards ceremony to be held as a fully virtual event on Sunday, March 13th. 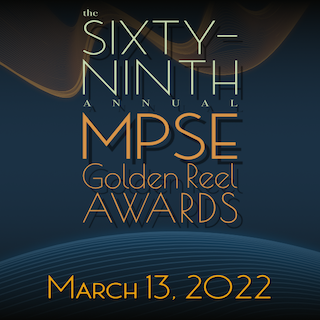 In keeping with the theme of this year’s awards ceremony, The Best of the Past and Present, MPSE is welcoming back its most celebrated members. Career Achievement honorees Harry Cohen (2017), John Roesch (2013), Cece Hall (2020), Richard L. Anderson (2007) and Anthony J. “Chic” Ciccolini III (2022) will be among those presenting awards for outstanding achievement in sound editing in 17 categories across feature films, television, animation, computer entertainment.

“The phenomenal sound work done by our members over the past year builds on the creativity and innovations of their predecessors,” said MPSE president Mark Lanza. “This year, in addition to honoring the best new work, we are reflecting on the rich traditions of our craft and the incredible artists who’ve come before us.”

This year’s awards ceremony will also be interlaced with archival sound and video material highlighting outstanding sound editing dating back to the founding of the Motion Picture Sound Editors in 1953.