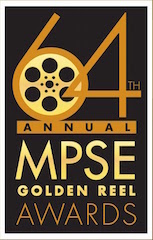 Netflix will serve as Presenting Sponsor of the event, which recognizes excellence in sound in motion picture, television, animation, documentary and interactive entertainment.

“We’re excited and grateful for the show of support from the entertainment industry and beyond,” said MPSE president Tom McCarthy. “The Golden Reel Awards ceremony is always a memorable and enjoyable night as the sound community gathers to celebrate the craft of sound as a storytelling tool.”