The Motion Picture Sound Editors association has announced the nominees in the 68th Annual MPSE Golden Reel Awards. Nominees represent the work of the world’s most talented sound artists and their contributions to the past year’s most outstanding feature film, television, animation, computer entertainment, and student productions. 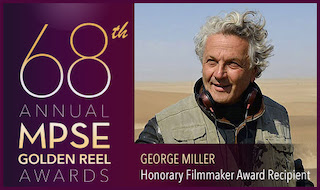 “We’re very excited about this year’s MPSE Golden Reel Awards. It will feature a dynamic, virtual format that will be great fun and allow people from around the world to participate,” said MPSE president Mark Lanza. “We will have presenters from every part of the globe along with many other surprises. Most importantly, this will be an opportunity to celebrate the great sound work that has been done over the past year. I congratulate all of this year’s distinguished nominees.”

This year’s MPSE Filmmaker Award winner is writer/director George Miller. The Career Achievement Award winner has yet to be announced

This year, the awards ceremony will be held as an international virtual event on Sunday, April 16 at 6:00 p.m. PST. Tickets to the 68th Annual MPSE Golden Reel Awards may be purchased at https://www.mpse.org/event-4193991