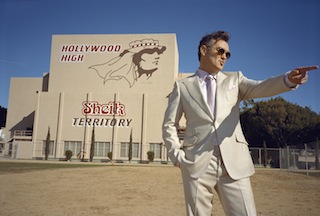 Eagle Rock Entertainment has appointed More2Screen to distribute legacy concert film, Morrissey 25: Live, to cinemas worldwide (except North America) beginnging in August. Filmed live during Morrissey’s most intimate gig in decades at the Hollywood High School in Los Angeles on March 2, this is the first authorized Morrissey film for nine years and marks 25 years of the solo career of one of the world’s most iconic and enigmatic performers.

The film opens with fans talking about their unwavering devotion to the singer and the unique appeal of this unusual venue – a striking contrast to the sold out arena concert at the Staples Center on the previous night. Tickets to the concert in the 1,800-seater school auditorium were sold out in 12 seconds and this now legendary concert became Morrissey’s penultimate performance on the US tour.  The concert features many classic tracks from the artist’s prolific repertoire including Meat Is Murder, Everyday Is Like Sunday, Please, Please, Please Let Me Get What I Want and The Boy With The Thorn In His Side.

Christine Costello, managing director, More2Screen said, "This is our fifth distribution project with Eagle Rock Entertainment and we’re delighted to continue our partnership with Morrissey 25: Live, a powerful and mesmerizing music concert film that captures the incredible stage presence of Morrissey and the continued passionate adoration of his devoted fans. High-caliber music content has made a significant contribution to ensuring the international focus of our business and we know our cinema partners worldwide will be keen to program this latest music release.”

Peter Worsley, managing director of digital and production at Eagle Rock Entertainment says of the collaboration with More2Screen, “Our partnership with More2Screen has developed over a series of highly successful worldwide theatrical releases and we’re looking forward to working with the team once again to take this seminal Morrissey film to his fans across the globe.”