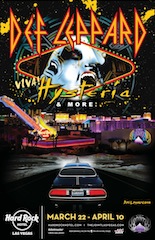 More2Screen has been appointed by AEG Live to distribute a spectacular rock show event, Def Leppard’s Viva Hysteria, to cinemas worldwide (except the U.S. and Canada) from September 19th. Filmed live in March at the Hard Rock Hotel, Las Vegas, this is an all-out, no-holds-barred music concert extravaganza destined to rock cinema screens across the globe.

Filmed live over two nights, the set list includes top-selling album Hysteria in its entirety, plus many of the band’s greatest hits – Rock of Ages and Photograph included. With 100 million records sold worldwide, Def Leppard continues to be one of the most potent forces in global rock. For the past 30 years the band has been a top box-office draw, consistently selling out arenas worldwide.

Christine Costello, managing director, More2Screen says, "From our experience distributing concert movies from other legendary groups like Queen, The Doors and The Rolling Stones we know that music events at the cinema have a fantastic global appeal and we’re very excited to be working with AEG Live to bring Def Leppard’s Viva Hysteria to our exhibition partners worldwide.”

John Rubey at AEG Live says, “With their reputation as an event cinema distributor with an impressive global reach, we’re looking forward to working with More2Screen to take this monumental rock event from the epic Def Leppard out to their many fans across the world.”