Matthews Studio Equipment has introduced a rig that further extends the range of filming environments for Samsung 360 Round camera. The Matthews VRig offers flexible mounting options, low center of gravity and a small footprint to minimize nadir hole obstruction while maintaining rock-solid stability. When paired with Samsung’s 360 Round, which captures true 4Kx4K 360 degree footage, users can record, edit and livestream complete VR video and audio, anywhere. 360 Round features a unibody chassis and compact design and is IP65 dust and water-resistant. 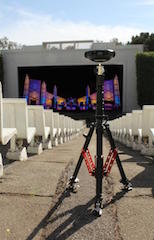 "Samsung 360 Round is built for creators who need a highly portable, high quality professional VR camera that they can take into a variety of environments," said Josh Dixon, emerging products lead, B2B mobile, Samsung Electronics America. "As we researched the marketplace for the ideal partner to build out a rig, time and time again, Matthews Studio Equipment was the name that came up with other vendors and our customers. They are hands down the leader in the industry for their rugged rigging solutions."

To truly maximize the value of the products together, Samsung and Matthews began collaborating on a refined packaged system with a new weather resistant skirt and hard case designed to house the 360Round and VRig in one protective shipping enclosure.

“The goal was to offer the virtual reality production market a complete system that answers many of the questions common with producers joining in this rapidly expanding industry,” said Phillips. “The 360Round and VRig complement each other in their ability to set up quickly and perform consistently at a level that professional cinematographers have grown to expect.”

“Samsung has emerged as the leader in virtual reality with industry leading technology from the camera to the head mounted display and Matthews is proud to be included in their ecosystem,” said Phillips.